I saw someone share this link on Facebook (link available below).  I could appreciate the pictures of the man at the flour mill in the midst of sacks of flour.  The flour sacks were an assortment of decorative patterns.  It brought back the memory of stories my Grandmothers told me. 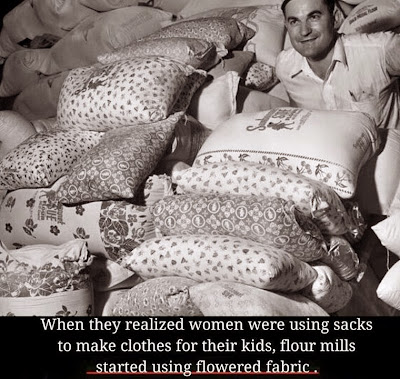 My Grandmothers both lived through the great depression.  Let's put life in a little bit of perspective. Grocery stores were where you went to get staples for baking: flour, sugar, baking soda, salt, yeast, etc.  There were very few premade cookies available unless you went to a bakery that made them daily.  Money was at a minimum.  Mother's became experts at making it stretch especially when it came to food.  They purchased 25 and 50 pound bags of flour necessary for baking their families weekly bread.

When flour mills realized that mothers were using the flour bags to sew dresses for their daughters, they began choosing material with patterns.  Mothers and daughters would go grocery shopping together to choose the material on the flour bag.  Food rationing during WWII changed all of that.  Interesting that the choice of the government to ration sugar in the homes left mothers with a challenging choice: make bread or buy bread and have sugar for other baking.

Whether intentional or unintentional, the governments choice to ration sugar led to a surge in mothers purchasing bread instead of baking it themselves.  I wonder after the fact, "If sugar was rationed how did large bakeries increase their supply needed as an increasingly large number of people purchased loaves of bread?"

Exert from: http://www.hudsoncream.com/history.taf
1943 ... Prior to World War II, most flour was sold in 25 and 50 pound cloth bags. During the war, sugar was rationed and many women began buying bread already baked so they could use their limited sugar in other recipes. This had a lasting impact, as women became accustomed to not baking bread, even after the sugar rations were lifted. It was following WWII that flour began to be packaged in smaller bags (at first, they were cloth bags in 5 and 10 pound quantities), and a growing portion of flour was sold to commercial bakeries.

According to that site on the history of milling flour, in the early 1960's flour bags were changed from cloth to paper.  The 5 and 10 pound cloth bags were no longer useable for making dresses and paper had become a less expensive commodity.

The 1950's had spurned a post WWII era referred to as "The Golden Era" in the United States of America.  Industry was on the growth.  Families had more money available to them.  The banking system began replacing the use of actual money with the use of "counter checks" at the same time in the late 40's and early 50's credit cards were created with the original "Diners Club".  Mothers moved away from home baking and the disposable era was born.


How many young women in 2015 could bake their own bread from scratch?  How many of those same young women could take a cloth flour bag and turn it into a cute dress for their daughter?  Back 100 years ago, store bought clothing was a special privilege.  Now it is all about style, fashion and wearing the current trend in clothing.  Most of the clothing purchases are put on credit causing families to be in debt.  A debt that is growing by leaps and bounds.  Is that better?
Posted by Back40 at 12:00 PM