Here is some brutal honesty.  I was sitting on the toilet  (working out a problem.) I noticed the orange glowing sunset out the window.  The immediate thought that came into my mind was, "we are under a rainbow".
Isn't that the first thing that would come to your mind? To be fair it has been raining and/or threatening to rain since early afternoon.
The dogs were barking like someone was outside. So I had to go immediately from the bathroom to the front door as all 4 dogs rushed outside. That's when I saw it; the brightest, most brilliant double rainbow that I've seen in a long time.
With my cell phone in hand, I snuck outside in my pajamas. (You can do that in the country.) But because I was in my pajamas, I decided not to take off down the road where I could have taken a photo of the full rainbow.  It was a double rainbow and the photo does not do it justice.  It was shining like diamonds hanging in the sky.  Each of the seven colors beaming bold and distinct; shadowing another rainbow outside and spreading the bright color like a dome under the rainbow.
The rainbow is God's promise to mankind that there will never be another destruction like the great flood. Ironically, I received a Baltic Amber ring in the mail today.  Scientist don't understand but their used to be a forest at the bottom of what is now the Baltic Sea.  (DUH! read the bible, here is more physical proof.)  The forest was suddenly covered up with large amounts of water.  The pressure, time, and heat has caused the sap in the trees to harden.  In some of the larger pieces they have found bugs locked inside the stones. I just needed to own a piece of history that proves that Noah's flood actually happened. 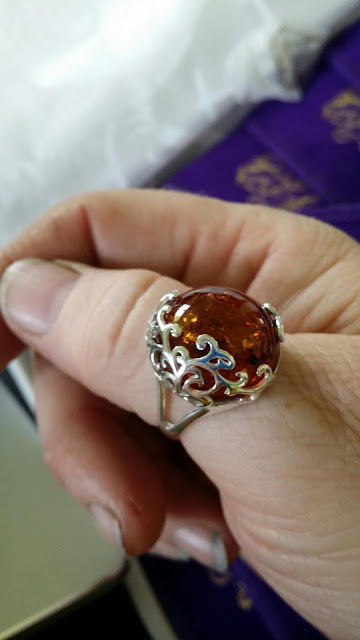