Everybody always has leftovers from the holidays. This year we had an extremely large amount of leftover turkey because of the weather. So I decided to make wild rice soup with it.


2 cups ray wild rice (cook according to directions on package)
10 cloves garlic finely chopped
1/3 cup chopped onion
1 carrot finely shredded
4 cups chopped turkey
4 cups broth (chicken or turkey)
1/3 cup flour stirred in 2 cups milk
1 stick of butter
salt and pepper to taste
(Optional but I was out of today. Chopped celery and mushrooms.)
I started by cooking my rice according to the package. I used 1/2 cup brown rice and 1 1/2 cup wild rice.
I love garlic and I grow it in my garden. I used an ample 10 cloves.
It doesn't take too long to smash and chop them.
We grow our own onions and freeze them. I chose the red onions and chopped them finer. Then I shredded the last of my garden fresh carrots.
If I had mushrooms and celery I would have prepared it here. Then it was time to chop (dice) the leftover turkey. I chose to use 4 cups. I like to be able to taste the meat in my soup.
I added 4 cups of broth. The amount of broth that is used depends upon the amount of soup you choose to make and the desired thickness of the soup. 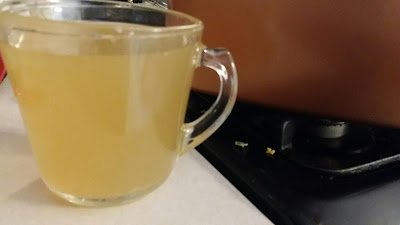 Speaking of thickening, I added 1/3 cup flour to 2 cups milk and mixed it so there were no lumps. Then I added it to the rest of the mixture which will thicken it slightly but not too much.
Everything's better with butter!  I added a stick in because that just sounded decadent.
When you use a flour thickener you need to have a little more salt to overcome the taste of the flour. So I added 4 teaspoons of garlic and sea salt seasoning and 2 teaspoons of pepper.
Well that's the end of my recipe. But, Dale saw the leftover au gratin potatoes and suggested that we add those in as well. Those who follow my recipes on a regular basis know that anything goes!
The thing about soup is that the more and longer that it cooks, the better it tastes.
Posted by Back40 at 8:45 PM