The economy is getting better?

I got my proposed property tax statement.  I have a 3 bedroom, two bathroom house that is a single family residence but does have a full second kitchen on the second floor.  The house is on a double lot.

According to my tax statement, my house is worth next to nothing.  The market value is only slightly over the value of the land.  The value dropped $4,800 this year.  It has dropped nearly every year since I purchased it but never this much.

I just want to yell, "liar, liar pants on fire!" to every news reporter that report the economy is rebounding.  Stores are advertising for Christmas bigger than ever before. More stores are pushing into family time - Thanksgiving Day because they know that the economy is weak and they need to con people using gimics.

The economy will get better when people and the government stop overspending their income and start saving. 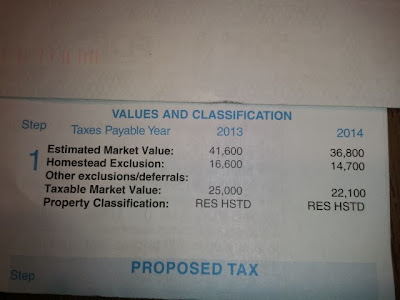