I bought sweet corn at the Cub Store in Buffalo, Minnesota. It was 10 cents a cob with a limit of 10.  Corn is finally visible in the fields, barely. So it is obvious that this was not grown locally. Definitely a loss leader for the store because there was no way they could bring fresh sweet corn that distance and profitably sell it for ten cents a cob.  We were amazed that the cobs were full, sweet and tender.

On a separate note, I was shocked and amazed coming home at 10:45 PM to see a father biking while pulling a young child behind, one kid was riding a small bike and a third kid was riding a three wheeler big wheels style. I won't be surprised to see a kid was hit and killed. At the key time when the drunks are starting to leave the bars, he is biking down the dark streets.  I reserve this phrase for a rare use, "the stupid idiot!" 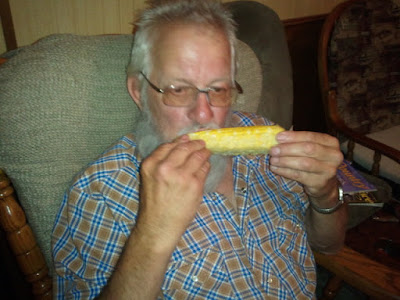