I don't like house keeping coming in every day when I stay at hotels.  I use the "do not disturb" sign.  So doesn't this look nice; almost like a gift basket.  Despite their push for economizing and re-using towels, they have several rolled up with shampoo, conditioner and lotion in it.  They also put coffee packets in there.  I only have one question, "where is the chocolate?"

My co-worker this week tells me that he is a vegan.  I wonder if he knows what that is because for supper he had trout, green beans that looked like they were sauteed in butter and hash browns.  Modified vegetarian maybe but not vegan (no animal or product that comes from an animal.)

But choosing a restaurant is difficult.  He nixed all of my favorites: Red Lobster, Texas Steak House, Cracker Barrel, Wendy's and Arby's and Dale thinks that I am picky!  Overall supper was good.  I had a house salad and a sushi roll.  Mmmmm good. 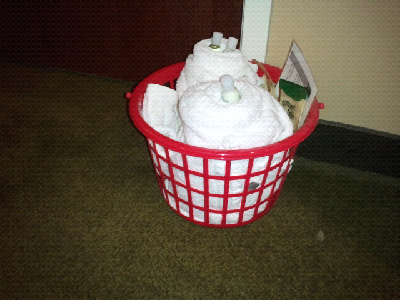 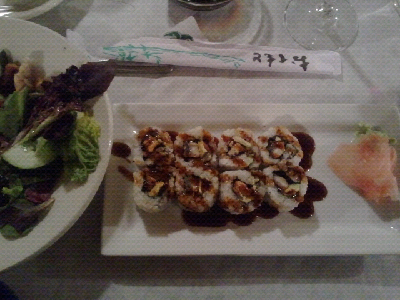