It is a confusing world

Last weekend, I saw a pack of people on bicycles.  We have had the coldest weather of the winter this week.  Today I out at a park with the dogs (don't worry; the puppies stayed at home) and what did a see coming up the road? A farmer in his tractor pulling an auger.

I presume the food auger broke down and needed to be pulled to the local implement dealership for repairs. They usually do that with the truck.  For some reason that I will never know, he decided to use the tractor.

On the way back from the park I was driving slow and pulling up to a stop sign when it became evident the last two car lengths from this direction was shear ice.  I looked around to make sure no other cars were around and I carefully rolled through the stop sign. It was a right hand turn so I was concerned that the car may slide into the other lane of traffic. But once I let up on the brake the car stopped its slide and allowed me to safely steer around the corner.

They didn't clean up the powder from last night and it is snowing again.  That means it is a few degrees warmer.  Let's hope and pray that the wind doesn't pick up.

Back to the confusing world; on KARE11 this morning they did the two hour show live from an ice castle by Mall of America.  Are you saying "what's the big deal?"  They had a style show. All the models were styling bathing suits! 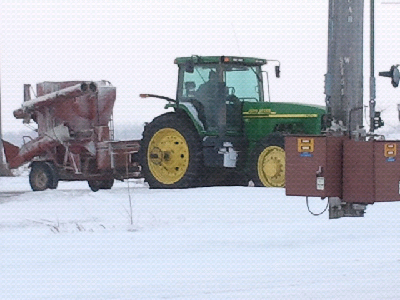