I am not sure if I have a defective tub, if it was installed wrong or a bit of both. When the tub was installed, I stepped in and felt the "spongy" feeling. I mentioned it to the installer and he mentioned that he forgot the support under the tub. He contacted someone that told him he could spray foam insulation in and it would give it enough support.

That could have been a joke because (as a stereo-type) contractors have a different sense of humor and speak a language that I don't understand.

When the crack appeared, I called and was told that the contractor knew what he was doing and would NEVER forget to put supports under the tub.  That I should have a surface repair specialist come in and fix it.  Really???? There is this HUGE soft spot and paying someone to fix a small crack is not going to fix the problem if there is no support under it.  I guess I won't know for sure until the demo is complete.

I have a week of "vacation" to demolish the bathroom, have a plumber correct any plumbing issues and re-installing a new tub.  Lord help me! I've done constuction before but with so many unknowns...I'm a bit nervous.  Keep an eye on the updates over the next 10 days.

Looking at the pictures, the crack is at about one o'clock in the blue died water. I died it so you could see the "spongy" area.  The crack is a little bigger than a quarter. 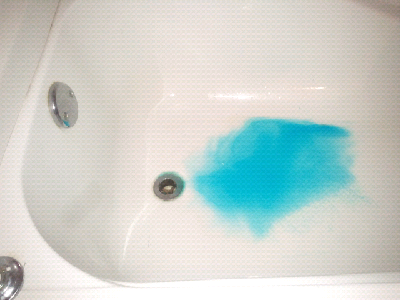 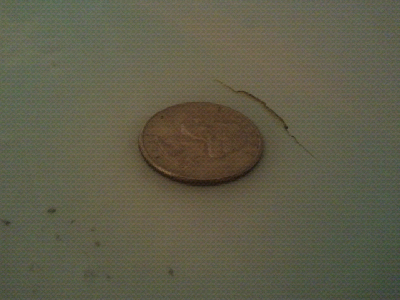