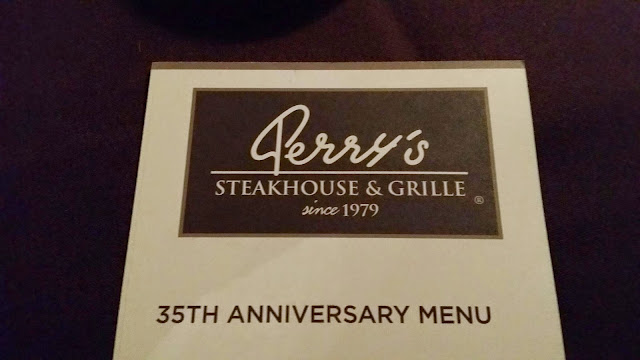 For supper tonight the implementation team went out to Perry's for supper.  Oh it was a delicious meal.  It was the type of place that takes several hours to eat the meal.  The ambience was fabulous even though it was a bit noisy.  In the front corner, they had a piano bar with live piano music that permeated the entire restaurant.  (And it was not a small restaurant.)
﻿﻿
In the middle of the restaurant they had a wine vault with 4 ladders one on each side for removing and restocking the bottles of wine.﻿﻿
As the evening progressed, the lights were lowered in degrees.  This art caught my eye.  Not only for the piece of art but for how the lights on either side and the light that highlighted the art created an artistic viewpoint itself.﻿﻿
Then there was the meal!  it was Awesome!  I had a good low carb option.  With eight of us at the table there was also a lot of good conversation.  ﻿﻿
There were several ala carte sides that were ordered. The Spinach was creamed in a rich cheese sauce so I am hoping that it was low carb.  Part way through the meal, nearly all the women's phones sounded with the standard emergency alert.  There was an Amber Alert fairly close to where we were located.  We all grabbed our phones and read the notice - like we were going to be able to do anything within the restaurant.﻿﻿ ﻿﻿﻿﻿

After such a large meal, they served either very large desserts or very rich desserts (or both?!) No she did not eat the whole thing.  Left overs ended up going home for the family.  I didn't order dessert but I ended up sharing 3-4 teaspoons of a cream brule with someone at the table.﻿﻿﻿﻿
A delicious, warm and welcoming evening with team members from both the my company and my clients company.  I walked out not feeling overly stuffed.  But as the food has settled I am feeling like I might burst!﻿﻿ 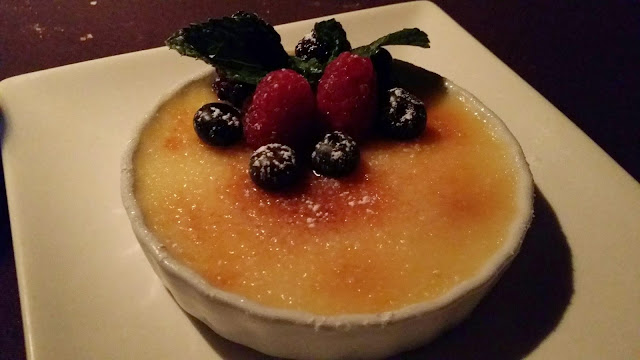