An early birthday gift from God with Love

Wednesday, Thursday and Friday night the KP index was high.  At some point, they reached between 4 and 6.  The minimum of 4 and the Northern Lights maybe visible by my place in Richmond, Minnesota.  It isn't numbers alone, they are just a predictor.  There are many other factors which honestly go right over my head.  All three nights, I spent time outside doing test shots and waiting or watching.  Each night, I saw a meteorite.  I wasn't lucky enough to capture it on film but it was a blessing which I openly received and said a prayer. 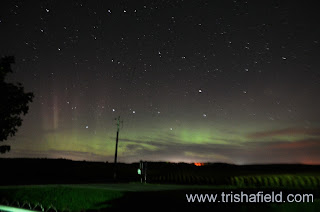 Wednesday night, the Northern Lights were visible to the naked eye.  With the camera it looked like a crown with jewels floating back and forth across the skies. Maybe an Emerald Crown?! 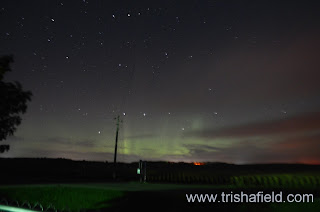 Clouds rolled in right before sunset.  Even though the numbers were good, I was afraid that I would miss them.  I walked out in time to see a significant part of the light show. 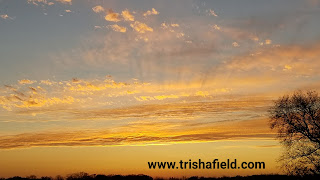 Sunset was amazing too!  The light of the setting sun along with a windblown cloud in the sky, once again gave the illusion of a crown floating in the sky.  This one is a gold base with Tanzanite jewels across the top. 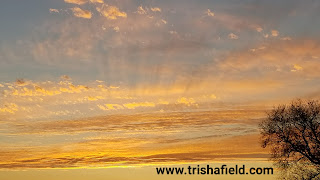 The sky that night didn't produce any Northern Lights.  But the Milkyway was shining bright. 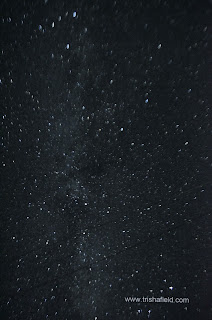 I am trying to learn the best settings and camera lens for photographing the Milky way.  I was having problems with my lens getting moisture on it and blurring my photograph.  (Learning curve). 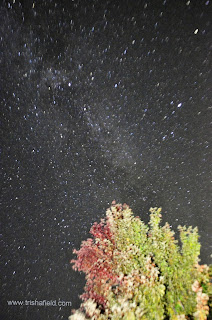 Friday the Aurora app that I was using was telling me all day that the numbers were high.  Someone was seeing a good show. 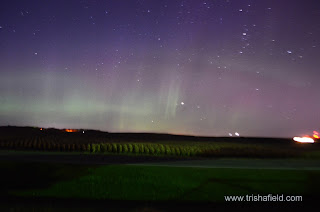 About an hour after sunset, I decided to go outside for a test shot.  It is surprising how long it takes for the sky to get dark enough to see the lights. 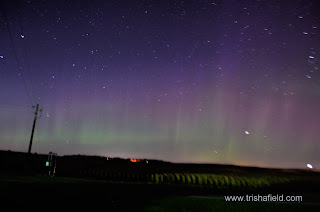 Timing was PERFECT! The lights were once again visibly dancing.  Aurora hunters refer to this as "Lady Aurora danced across the skies with all her brilliance in green and purple." The lady stayed around for awhile as a green arch that raised and lowered along the horizon.  Periodically it would start to dance but nothing as brilliant as the pillars in the early evening. 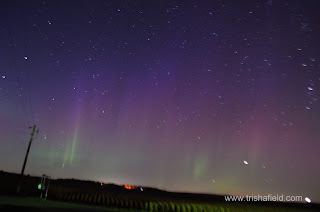 It was like an early gift from God. What a blessing to be able to see the Northern Lights two nights in one week and meteors three nights in a row!
Posted by Back40 at 10:51 PM