Dale volunteered to drive a person in need to the food shelf near their place.  One of the things they were given was wild rice. They gave it to Dale because they didn't know how to cook with it.  That is a common issue with food given to the food shelf.

It was good soup making weather. So at noon, I boiled eight cups of water with one and a half cups of wild rice.  I kept it at a low heat forhalf an hour. Then I turned off the heat and ran errands for a couple hours.

When I got back I sauteed two onions with half a stick of butter. I put the boneless skinless chicken breasts on top and pour just a small amount of half and half (milk) on top and cover it.

Then I poured a box of low sodium chicken broth in a crock pot with the rice. I chopped a few small carrots and two stocks of celery adding it with the rice.

I removed the steamed chicken to cool and poured the rest of the two cups of half and half that I had mixed with a half cup of flour. I warmed the milk/flour and onion/butter mixtures enough to thicken it then added it to the soup base. I chopped the chicken, added ground pepper and ground sea salt. Then with the crock pot on high, it cooked for almost three hours.

But wow was it good! With or without crackers. (I'm not sure where Dale found the pre-packaged crackers but cute, huh!?!) 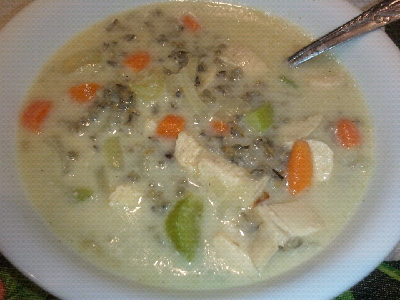 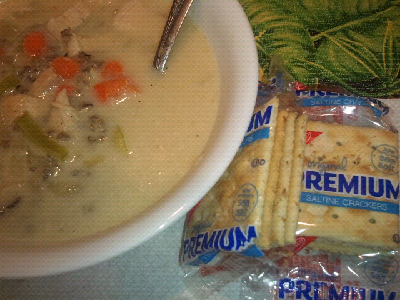